Having bragged so about my recent bout of finishitis (now with even more FOs! Three pairs of wristwarmers churned out over Christmas – though admittedly one was Elf-sized – plus a smattering of hats), I find myself contemplating Finishing of a different sort. The sort that has to be dealt with before any knitting is really done. The kind we all (almost all) hate.

I don’t have the pathological fear of seams that some knitters do. Learning the fine art of whipstitch helped: I know everyone trumpets the virtues of mattress stitch, which is indeed a fine seam, but bulky and slow – whipstitch is fast, flat, and while not invisible, properly done it’s very neat, even attractive. Really, though, whatever technique you favour, simply learning to do it well makes the whole process much more pleasant. This is true even of my absolute least favourite task of all (quite possibly yours, too): weaving in ends. Lucy Neatby’s book was surprisingly helpful on this score.* I am itching to get my hands on Deborah Newton’s new book, too; who knows what I can still learn!

So I’m okay with seaming and such. In general. But. 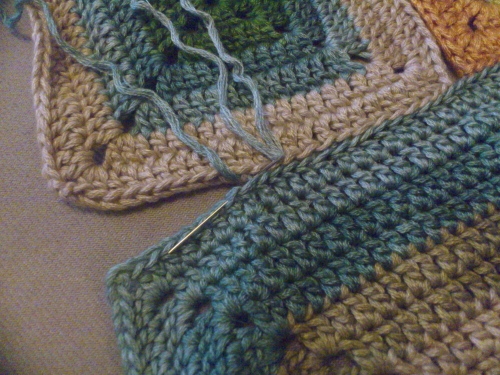 Turns out… I kind of hate ladder stitch.

I love how neat it is. But trying to pick up those little bars in the middle of my stitches is fiddly – especially with Serina, which is quite splitty, as you can see. So it’s slow. And there are so many squares… oh, so many squares. Did I mention how many squares? A bunch of ’em. So last night, I laid it all out, played complicated jigsaw puzzle games to ensure that no two adjacent squares had final rounds in the same colour, safety pinned the different sections together and bagged each of them in its own little ziplock, sat down, gritted my teeth, and got stuck in. Thinking all the while: THIS BEAST WILL BE THE DEATH OF ME. I got hardly anything done before bedtime. (To be fair, just finishing the last few squares and laying them out had taken me most of the evening already.)

This morning I picked it up again, and carried on. Progress still verrrry slow. But you know what? I’m not hating it.

I think this may be partly thanks to the pleasure of “doing it properly”. But it’s also a state of mind: having resigned myself to the fact that no, this isn’t 90% done, or even 80% done probably, it’s going to be quite a while yet before I can get stuck into the next thing… well, okay: this is what I’m doing, so do it. And it occurs to me, writing this,** that maybe motherhood can take some credit. I’ve had to get used to not being able to do the thing I really want to do, because I’m doing what Elfling needs me to do now, and I’m doing it at Elf pace, and that can’t be rushed. So just be in the moment. Enjoy it. Even if “it” happens to involve seams whose total length could best be measured in light years… just enjoy it.

And maybe a nice G&T.

_____
* But it needs photos, Lucy! Arg! It would have been so much better with photos…
** Second time recently I’ve had a minor insight through blogging. I should really blog more.

3 thoughts on “On finishing”