1. You know how the one bit of advice everybody gives new moms is to sleep whenever baby sleeps and basically ignore everything else… “the housework can wait”? What a piece of crap. I mean yes, sort of. You have to sleep. You can only do it during naps. Having a spotless home is obviously not top priority. But. Well, firstly, some housework can’t wait (unless you quickly want to be forced through good old Mother Necessity to be really creative in the matter of clothing, and for that matter eating). And secondly, a clean house is good for the soul.

I was thinking about that recently because, while we’re still under some stress here and Dude has been giving me hell in the sleep department and all that, we have been absolutely rigid about cleaning the flat thoroughly every weekend. It’s obviously never what we want to be doing with our precious time, and usually it’s pretty hard carving out an opportunity to get it done. But it does get done, and seeing the flat all sparkly and fresh and orderly, ready for another week, enjoying both the sense of peace a tidy home gives and the sense of accomplishment we gain from seeing the proof that we CAN keep things under control despite everything…

2. Similarly, every weekend, no matter what, I go for a run. I’d dearly love to be going more than once a week, but getting up early midweek to run before Armin goes to work – well, that’s crazy talk. Once a week, though, I can sacrifice nap time to get out there and jog gently through some beautiful forests.*

Even when I’m falling down tired, I still go. And even though I spend the rest of the day even more shattered than I started, it refreshes me in a way that sleep never could. Being alone is good. Enjoying the scenery is good. Feeling like I’m doing something for myself, something to make me stronger and happier, feeling my muscles do something other than lift children…

3. I should point out that my “running” is slow enough that I could be mistaken for an unusually upright, lycra-clad sloth. Similarly, our flat is small, and there are two of us to clean it. Neither of these things is an amazing accomplishment. But small accomplishments are where it’s at right now.

4. In that vein, I was unreasonably pleased recently by stringing together a few beads from a beginner’s kit to make this. 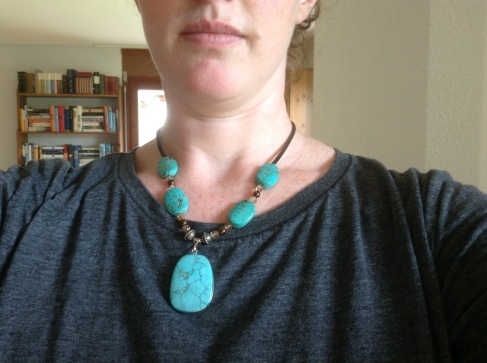 It’s really pretty, but the actual making of it was so low-effort as to be almost disappointing. It doesn’t count as “creativity” in any sense whatsoever. But the mere fact that I was able to sit for five minutes and actually finish something… that was pretty amazing.

Plus, that kit had been sitting around gathering dust for like five years (I bought it while pregnant with Elfling), so actually using it basically counts as tidying up. Go me! So productive.

5. And then in a fit of wossname I perpetrated Craft on unsuspecting furniture. 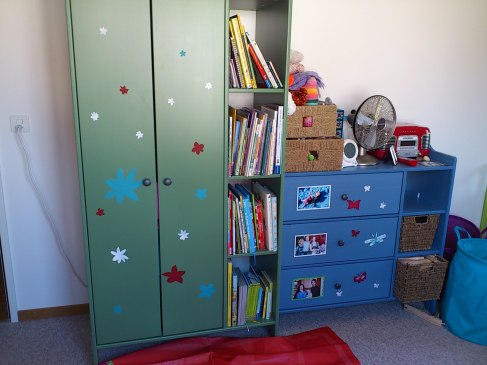 (Pic isn’t clear, so: the flowers and butterflies were the attack in question. The photos on those drawers are just stuck up by Elf request.)

I may not be getting much knitting done (oh, except a dress for Barbie)** but I seem to be having an attack of Craft. This is surprising and a little suspicious. But, small accomplishments: just getting them done, regardless of eptitude, makes me feel good.

–––––
*Back in London, I usually ran for around 4.5km – the distance to Osterley Park, around, and back again. I could add some twists to up the distance, but usually didn’t. Unless I was in training for a race, there was no motivation. Here, my average distance is 7-8km, because that’s about what I need to explore the places I want to go. Last week it was over 10km. There’s somewhere I’m keen to go that will probably take me close to 20km. Living here seems to be pretty good for my fitness.
** Hot tip: making something for Barbie gets you out of all kinds of parenting duty. “Sorry Elf, I have to finish Barbie’s dress.” “Okay mommy. Knit! Go knit! Go knit NOW!”

One thought on “5 things (in which Craft is perpetrated)”