One of the great things about the Gift-Along is the chance to discover new-to-you designers. The stars of the knitting world are awesome, and we all have our personal favourites, but it can be hard to explore less charted territory. Yet there are plenty of people creating gorgeous things, who aren’t as well known – maybe they only publish infrequently, or are new to the design game, but they still have a lot to offer.

As a participant, I got to interview one of these budding designers. Saga Hein is a Swedish student, just 24, who’s putting out some beautiful patterns under the name “Kung Midas” (since her favourite colour is gold, and Kungen – The King – was her former graffiti tag). She describes herself as “a tea drinker, history enthusiast, cat lover and bookworm”, and shares her process on Instagram. Here’s some more about her clean, modern designs. 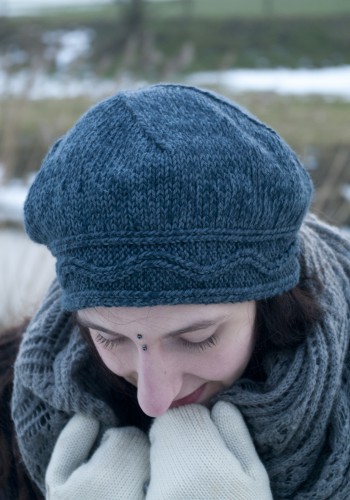 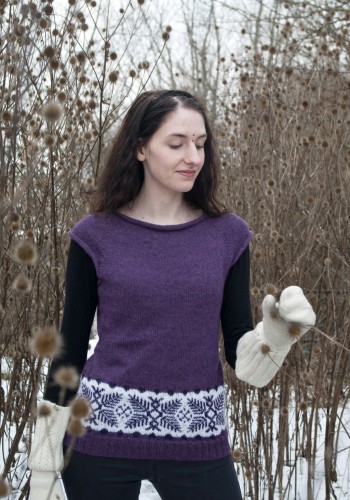 She designs what she likes to knit – but not necessarily what she likes to wear!
“I do like them all, but they are not all my style. I don’t actually wear knits very much at all. I have a handful that I keep for myself and actually use more than once.
“Of my patterns released so far, my favourite is Katla. But the one design I have used the most is my Kedja hat, which will be released within a few days. I usually do not like to knit the same pattern twice, mine or anyone else’s, but I did make two of these.”

Designing is her main creative expression.
“Designing a pattern (and all that includes) I have found to be one of the few creative pursuits that I have patience for. I am very good at coming up with stuff I’d like to like doing, only to find out that once or twice was enough. Designing is so far not running out of the fun factor. But it definitely balances out all the academic reading (and thinking) I have to do!”

Her favourite part of the process is grading. (So basically, the complete opposite of me.)
“I love knitting, I am good at maths and I love the putting together of the pattern as well. It might sound a bit nerdy, but I really love to sit and tweak my numbers and write them in my pattern. That and photo editing. My least favourite part is making the schematic and modelling something when I want a snowy background and it is really cold and I of course can’t wear a jacket and I grow more irritated every minute and that of course shows in the pictures and it all takes even longer…”

The concept comes before the yarn – most of the time.
“I might stash up a lot of yarn at times when I have some more money and I always see if I have anything at home first when I try to find yarn for a design, but very seldom do I look at a yarn and then see what I want to make of it.”
One exception was the Urd bag – incidentally, an exciting discovery for one of my own GAL discoveries, Meanest Mommy, who tweeted that it was just what she’d been looking for. “I had already made two patterns in that yarn, my Elk in the Trees skirt and my Vaixell cardigan, which is in testing now. I loved knitting with that yarn so much so I wanted to make more with it. I made a vest with a mosaic pattern I generated and found that the yarn worked really well with mosaic/slip stitch patterns. At the time I was doing my internship – I’m studying to become a teacher – so I was at school all day and found I needed a small bag to carry around my keycard and my phone, since I didn’t always have pockets. So the need for a small bag and the need to knit more mosaic stitch patterns with that yarn collided to create the Urd bag.”

She comes by her distinctive, historically inspired motifs honestly.
“I started my academic career studying archaeology and my favourite part was the Bronze Age rock carvings which are all around here. So I have made colourwork patterns of my favourite carvings and am creating a collection from that, my “bronze collection”. It also includes Elk in the Trees, and then I have three more waiting to go through the system (tech-ed and testing) and lots more motifs waiting for a garment. Vaixell is scheduled to be published in February/March 2015, when all testing is done.”

Gift-Along 2014 has yielded three exciting discoveries for her.
“I’ve followed the designer Terri Kruse on Instagram almost since I got my own account (well, not very long ago, a few months) and she doesn’t post much about her own designs, but then when I found her patterns on Ravelry I really liked her style, the colours and the photos. The other thing I have discovered is the Matilde cardigan by Cristina Ghirlanda, I am so in love and after purchasing the pattern a bit scared but SO impressed.
“The last and probably best thing I discovered in the GAL was my own excitement. I’ve never been in a KAL and it was at least two years since I made any garment from a pattern not my own. The first few days I was just crazy excited, and knitted at a speed I have no words for! I’m not very good at taking part in the forums on Ravelry, so the GAL has definitely given me the feeling of a knitting community, which I think very many feel there as well. I don’t know many knitters in real life (my mother, my two grandmothers and lately also my best friend), and no designers, so I’m loving it!”

I love that – yes, Ravelry has been a fantastically welcoming and inspiring community for me, and it’s great to think that the GAL has created a way for more crafters to experience that. Thanks for talking to me, Saga!