There’s a rash of babies in the family atm. Three of Armin’s cousins and his brother are sprogging. Very exciting, but a bit stressful for an overcommitted knitter.

I mean. It’s not actually compulsory to knit a gift for a baby. I’m told. But you know.

So I’m taking the opportunity to try out some of the cute patterns that have been lurking in my queue for ages, starting with two very different bunnies. Very different in construction, that is; remarkably similar in mutantness of results. 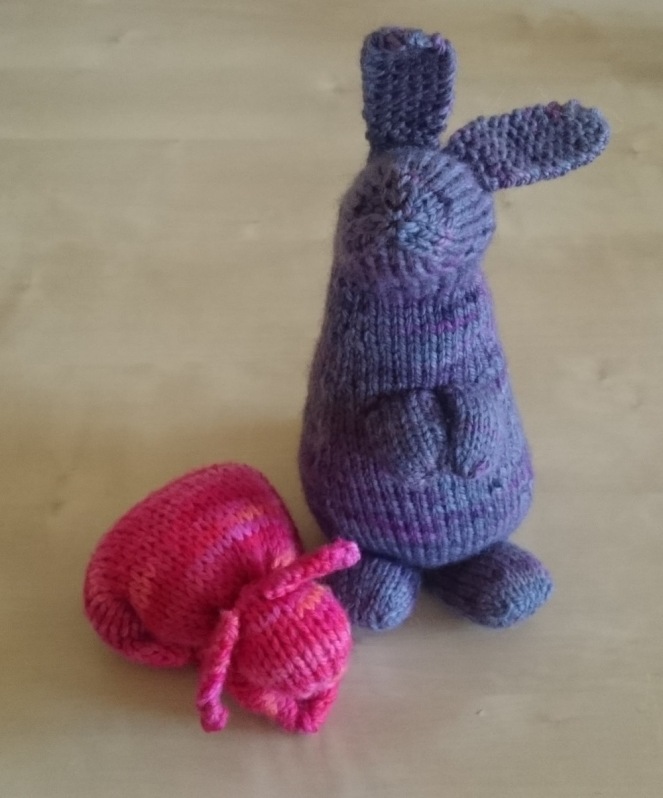 First I tried the very clever Knitted square bunny, by Jackie Erickson-Schweitzer. You knit a square, sew along sundry fold lines and attach ears. Seemples! Only, mine came out distinctly pear-shaped, for a bunny. I think the fault can be laid at the foot of tension – my cast-on edge was looser than my cast-off, so it wasn’t a perfect square, and ended up quite bottom-heavy. I added a bobble for a tail (the pattern suggests pulling out a tuft of stuffing, which sounds adorable but not entirely baby-friendly) and tried to add a hint of bum shaping at the same time. Frankly, bunnies do not have cleft bums, but they certainly don’t have extra-wide bums… mine now has both. Well. It’s still cute.

For my next effort I tried the more traditionally shaped (and bigger) Rabbitty by cheezombie. No origami here – it’s a knitted tube, with more knitted tubes or flaps for limbs etc.

Quite a dapper gent, no? Per the pattern, he should have eyeballs – big round knitted-on ones – but I didn’t have white yarn, and frankly I find this version a lot less… startling.

The tail is bigger than either of his forepaws. Which seemed frankly wrong until I actually made it. It works, and as a bonus, helps him to stand up. Nützlich!

I have to admit, I’ve never been keen on knitting toys. Which I guess explains the slightly dodgy results: I am not practised in making fiddly little tubes, or getting the stuffing exactly right. These bunnies haven’t converted me, but they were more fun than I expected, and I can definitely appreciate the instant gratification angle. Especially since I’ve spent the past too many months working on a beautiful, but very time-consuming, laceweight cardigan…