I used to have a small collection of old books – inherited from my mother (who has the same proclivity), or randomly found in thrift shops. Many of them were collected simply because they were pretty, but some because of what you might call historical interest. Most of it (the purely pretty ones) have been discarded over the course of decades, and of major international house moves (and some I really regret, eg my Enquire Within Upon Everything – at the time I assumed I’d find another one really easily, but I haven’t). These four, though, I will take to my grave (and am pretty keen on finding the missing four).

They’re helpful educational books forming the “Self and Sex Series”, published in the States around the turn of the last century by an organisation supported by the (in)famous Dr Kellogg and other worthies. 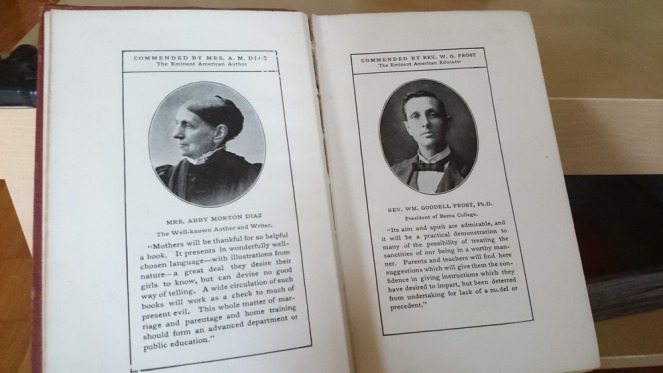 With four books for each sex, they addressed successive stages of life: girl/boy, young woman/man, wife/husband, and woman/man of 45. (I have never yet seen one of those last two. You can imagine how curious I am.) They range over assorted subjects – hygiene and such – with particular attention given (though fairly circuitously) to, well, sex. All most emphatically Morally handled. 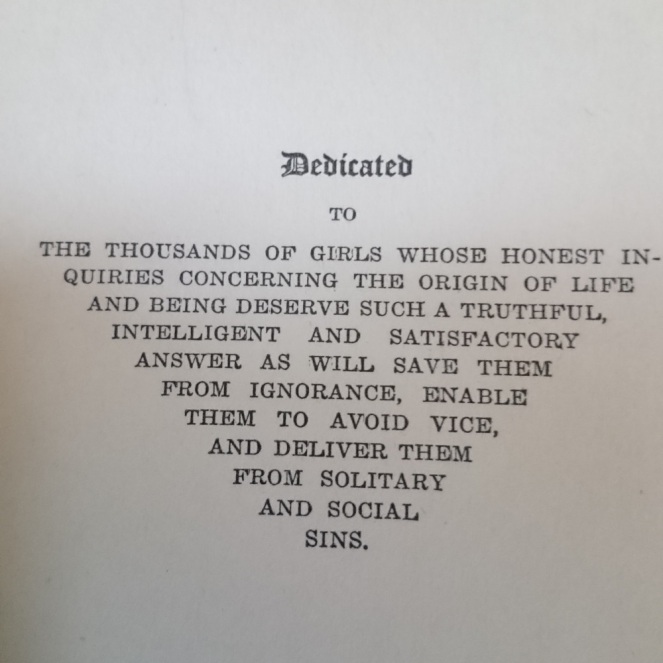 They are delightful. And completely weird. You can get about halfway through What a Young WOMAN Ought to Know before the author awkwardly introduces the fact that, um, there are actually differences between the sexes other than what they wear. Young Girls are sternly told that using the toilet is a private business, because you wouldn’t leave a bucket of filth lying around the middle of a room. (Really, though, how is it that anyone might have needed a book to tell them to close the bathroom door?) A lot of work is also put into defending traditional gender roles. The Fate of a Nation May Depend on a Wholesome Meal! 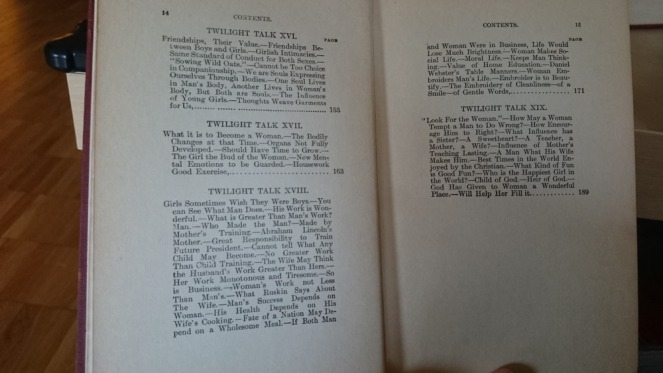 But my favourite parts, dirty-minded as I am, are the melancholy warnings about the evils of self-abuse. (And, in the marital books, the evils of enjoying marital relations too much.) 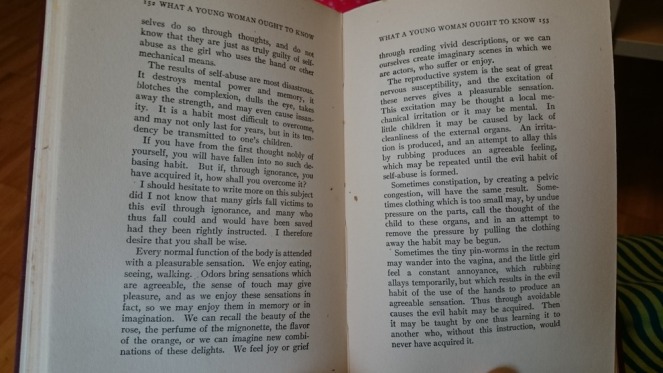 If I were a cleverer knitter, I might find my way to designing a collection inspired by these works of wisdom. I’m completely charmed by Hunter Hammersen’s Victorian etiquette collection (inexplicably I haven’t bought it yet, but it’s only a matter of time), and greatly excited by Karie Westermann’s upcoming Thing of Paper. Book-inspired knitting is the best of all possible things! But I don’t quite see where I’d go with pin-worms and housework as Good Exercise… though I guess Woman’s Role could lead to a fine embroidered cardigan.

One thought on “Do you know what you Ought to Know?”